Hello everyone. I have started to play the flute about two months ago, while I was on a trip in India. I took a few private lessons while I was in there, in a city called Dharamshala (they have a lot of people who give lessons for music instruments there). I was taught the very basics, like how to hold the flute, blow correctly, how to play each note, and when I mastered those, my teacher taught me a few really basic Nepali folk songs (he was from Nepal). I'm fairly good at those now, and I want to start learning more songs, however, I've encountered a few problems:
First, most songs I find online are written with the classical note symbols on scales, which I don't know how to read, such as this one: 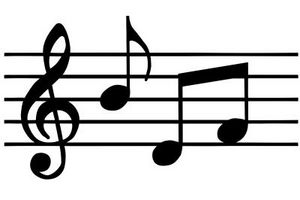 And when I tried to find a guide to help me read those, they were all for the professional, concert-type flute, like this one:
http://trevorjamesflutes.com/PDFs/TJ%20 ... 0chart.jpg (link because it's a big picture)

While my flute is very simple, it only has 6 holes for the fingers and another one for blowing, basically this one:

So basically, I'm asking if there's any chance that I could learn to play songs from scales on my simple-style flute. I only know to play these notes:

So, sorry for the long post, and warm thanks to anyone who can help me!

Authentic Bansuri players do not use traditional Western style notation.
For reading Western notation like the example you posted, there are a couple of things that will make it easier to read. Starting from the bottom of the staff (the five lines) the lines are named EGBDF. Some people use a sentence to help them remember: Every Good Boy Does Fine. The spaces between the lines are named FACE like the word face. In your example, the note are: B D and F. The note below the staff us a low D.

Also note that your Bansuri is in the key of E as engraved on your instrument. It doesn't matter if you are playing alone, but if you wish to play with other instruments, you will have to learn the different fingerings for the E Bansuri or transpose the music.

That should help you get started, but feel free to ask more questions.
"Never give a flute player a screwdriver."
--anonymous--
Top

Thank you very much

I have a few follow-up questions:

With your edit, you've discovered part of the answer to part of your question about the difference between F / F# and G / G#. They are different notes and they are a half-step apart. The bansuri is not a fully chromatic flute. There are 12 notes to the chromatic scale, but the bansuri cannot play all 12 notes unless some holes are only covered halfway. That's why they are made in 12 different keys. If yours is marked as a D bansuri, that should be correct.